Are you looking for a new sci-fi book series?  Check out Between Two Minds: Awakening by D C Wright-Hammer. 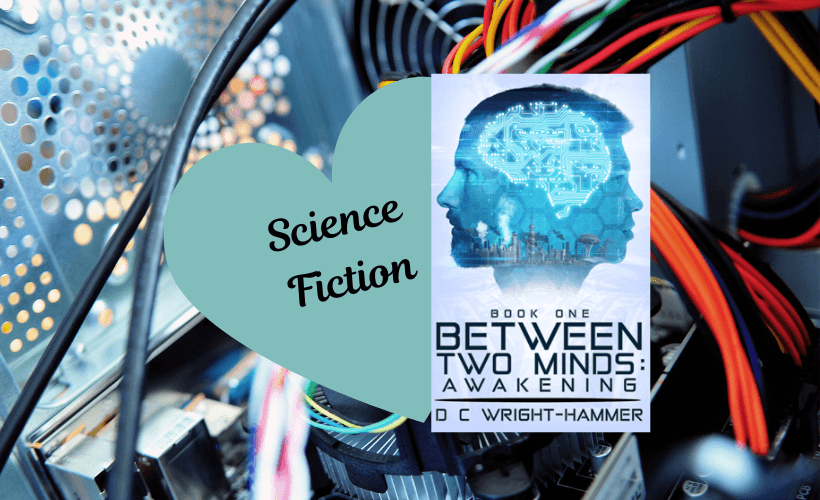 Imagine that you are born paralyzed and will never be able to walk. What if new technology could change all of that? Would you risk your life and your soul to have your mind migrated into a shiny new vessel? Say an attractive body with dark hair, green eyes, abs, and most importantly, mobility?

This is exactly the scenario that Ryan Carter finds himself in, and he dreams about nothing more than being able to walk and live an easier and more independent life.  Unfortunately, technology is glitchy and getting trapped between two minds is a confusing and deadly bind that Ryan must overcome. Sound intriguing?

If yes, check out Between Two Minds: Awakening, the first adventure thriller in this upcoming sci-fi series by indie author, D C Wright-Hammer. Review below:

[bctt tweet=”Imagine that you are born paralyzed and will never be able to walk. What if new technology could change all of that by swapping your mind into a new body? Would you risk your life? Enter Between Two Minds by D C Wright-Hammer.” username=”theuncorkedlib”]

A Book Review of Between Two Minds: Awakening (Book One) by D C Wright-Hammer

Trigger Warning—and thank you to the author for also noting this at the beginning of the book: A character commits suicide in Chapter 15; the following chapters allude back to the suicide.

Content Warning—There is minor warlike violence, gang violence, and a gruesome black market. None of these are overly graphic, and such details make up a smaller percentage of the story.

Paralyzed from the waist down, Ryan can finally afford a mind migration procedure. With therapy and training, he has selected his ideal body type and is preparing for surgery to merge his mind into a new host. Earlier procedures involved more deadly risks and complications, but as a much more common practice in society these days, Ryan has higher odds to survive and live a normal life.

After a successful procedure, Ryan pushes through the pain as he learns to see, speak, and move again. Excitedly, he learns how to walk for the first time. Although recovery is going well, Ryan has vivid dreams about another life. A life that is not his. The doctors sketchily blow off his concerns, but Ryan knows that something is not quite right. If he cannot separate himself from those dreams, he risks dementia and even death.

A Jumble Of Minds In This New Sci-Fi Series

Chapters alternate between Ryan and his ‘dream’ character, Charlie. Charlie has a sick wife and children and has had a pretty rough life and upbringing. Adopted by a broken and negligent family, Charlie is anything but the perfect guy. He falls in love, joins the Marines, and eventually decides that the only way he can help his dying family and their endless medical bills is to join a gang.

Working for the Padre, Charlie puts his life in danger and learns that the immoral product he is helping to secure and transfer is too closely related to his family’s ailments. In an attempt to leave the gang, Charlie’s life falls into shambles and ultimately, implodes. He is also responsible for deaths connected to Ryan’s life.

Ryan is caught in many different stages of Charlie’s life, and he struggles to figure out how to put Charlie to rest. Who is Charlie? Is he the persona of the host body? How is Charlie’s mind still intertwined with Ryan’s? Will Ryan be able to fight off Charlie’s memories for his own survival? And what happens if Charlie’s past comes back to haunt Ryan?

Love, death, and a moral fight ensue. Nothing is as it seems, and even part of Ryan’s life is built on lies.

D C Wright-Hammer’s Between Two Minds: Awakening is another new indie philosophical science fiction thriller that could one day become closer reality. Imagine how many people desire to have a functional, healthy body. What about those who want to live longer? The idea of mind migration is intriguing and invokes a multitude of moral questions about right and wrong.

Awakening leaves readers pondering these questions throughout the story and chooses to leave religion largely out of the debate.  Honestly, thank goodness.

Most engaging, I could not stop trying to figure out what was happening with Ryan and Charlie. There are twists and turns throughout the entire novel, and just when you begin to formulate one conclusion, more brilliant secrets are added into the mix.

Is Charlie still alive?  Are there two minds in one body?  How are Charlie’s and Ryan’s lives intertwined besides just the sharing of a body?

I dare you not to have just as many questions along the way.  There is endless action, alternating and mixed stories, and scattered timelines; be sure to pay attention and possibly not even blink.  Seriously, crack out the toothpicks.

Who Will Love This Title And New Sci-Fi Series?

Readers will find a gripping plot with a unique rotating storyline comprised of two protagonists.  Or is there one? Gah…Damnit mind benders. The story reminds me of Bill Aicher’s The Unfortunate Expiration of Mr. David S. Sparks with alternate realities and technology.  I love these latest sci-fi trends.  Bring it on…

Well written and fast-paced, the characters will touch you.  Helen is a pretty kickass female figure, and even though Charlie is an f’ed up guy, there are characteristics in him that create sympathy and heartache. Ryan is a strong and thoughtful man with the power to love, forgive, and live that is inspiring.  I cannot wait to see the second in the series.

Would you choose to mind migration if given the opportunity?

I would like to thank D C Wright-Hammer for personally sending me a free copy of Between Two Minds in exchange for a fair and honest review.

D C Wright-Hammer is a fantasy and science fiction writer. He works for a large software engineering company and is a former technology and engineering high school teacher. Learn more about the author here.

Be on the lookout for more in Wright-Hammer’s new sci-fi series like Between Two Minds: Revelation.

Want To Add This Upcoming New Sci-Fi Book Series To Your TBR List? Pin It: 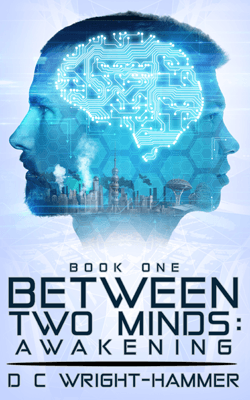 I love spec-fic/sci-fi stories that take the what-ifs of medical technology to their logical extreme, and really pull apart the moral quandaries associated with that, so this series sounds great! It sounded a little Avatar-y at first (I hated that movie, only saw it once right after it was released and an old boyfriend nagged me into going to the cinema to see it with him) - isn't that kind of how it began? A quadriplegic bloke goes to another planet where he can inhabit another body and run around and stuff? Regardless, this series sounds WAY better, I'll have to take a look at it sometime ;)

Avatar was not my favorite either, and yes, that is definitely how the Avatar story started. It's actually interesting that you mentioned Avatar because I didn't think that when I first read this book. In a way, though, the escaping a disabled body is definitely similar. As the author mentions, the comparison definitely ends at the paralysis, and I agree, I think you'd like this one a bit more. It's a lot darker than I expected, which is also needed in the spec fic genre sometimes. Breaking Bad was totally my jam, and I was feeling that here.

A lot of science fiction "borrows" from other science fiction. The Avatar parallel basically ends at the paralysis. Between Two Minds is much more of a cognitive exploration. I'd be interested to get your take if you check it out.

Amazing review love, and this book sounds really amazing. Adding it to my never ending pile of books to eventually read!

I feel you on those never ending piles!! I’m getting a bit behind too. The fall on NetGalley is like bookish Christmas heaven. I want everything!! I’ve started denying some requests because I neeeed those NetGalley ARCS. Thank you!! ?

Wow, this sounds like an action packed book that I may actually read. Normally, I'm not into sci-fi, however, this books sounds like a page-turner! I like books that keep me on the edge of my seat. I'm going to add this to my list.

I haven’t read a ton of sci-fi either. I started reviewing for one author and it spread like wildfire—in a really good way, though. All of these authors have created such intense technological worlds that I’m completely hooked! Modern sci fi has been really intriguing lately. This title is pretty cheap on Amazon ($2.99 for a digital copy). Well-worth it.

I really appreciate your detailed and thoughtful review about my debut novel. That fact that you enjoyed it is the icing on the cake.

Aw, thank you! Thank you for writing such a thrilling and mend bending book and sending me a copy to review. Don't forget to keep me in mind for Book Two. Thanks again, and have a great weekend. P.S. Between you and Bill Aicher, I realized that I need to read more sci fi. I wish my former HS teachers wrote such cool books.