Are you looking for philosophical science fiction recommendations? Check out this book review of William Aicher’s The Unfortunate Expiration of Mr. David S. Sparks. 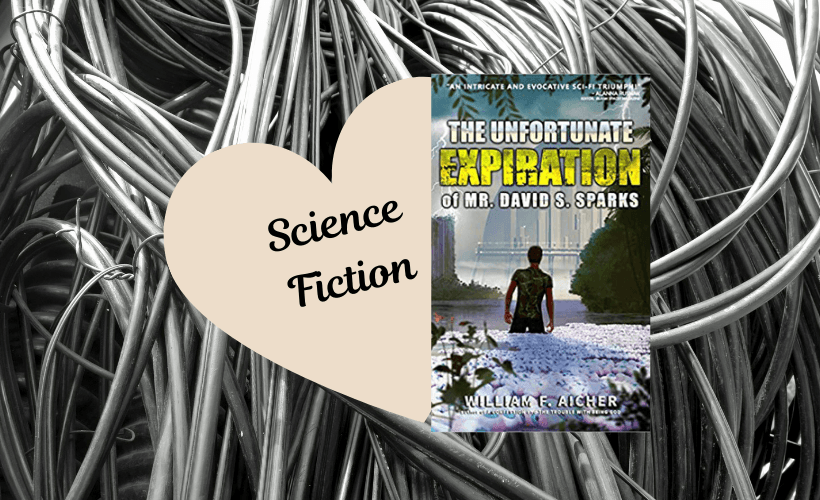 Parasitic worms burrowing into eye sockets, oceans filled with man-eating, snake-like monsters, and fields of eyes are just small proof that Mother Nature is pretty pissed off at mankind. Caught in this murderous world is Mr. David S. Sparks, but he has no idea how he landed here.

And how is he?

Shit, WHAT IS HE?

In William Aicher’s latest philosophical science fiction thriller, The Unfortunate Expiration of Mr. David S. Sparks, David attempts to recollect and piece together snippets of his memory from a seemingly normal past.

At the same time, he must fight a system overload and shutdown of his present situation. David is the most important man in the world, after all.

David can barely pledge allegiance to one side. The Progressives, drone-like businessmen, kill others for their own selfish gain but promise to restore his memories.

On the other hand, the Cause, a somewhat violent and obscure mixed group of organic hippies and scientists, recruits him for a secret mission.

Who will David help?  A thought-provoking, intellectual book about our environment, digitally obsessed society, and need for self-preservation, Aicher sneakily creates an ingenious modern-day satire. 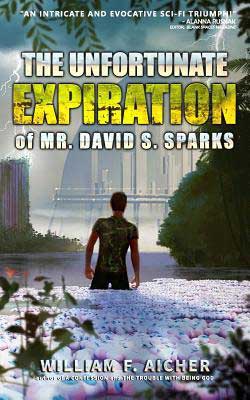 Philosophical Science Fiction At Its Best

Maybe We Should, You Know, Take Care of the World

Imagine waking up to a killer serpent rubbing against your legs like a toxic cat and a man from the Texas Chainsaw Massacre aimed and ready to redesign your body–well at least that is how I pictured Calvin. This scenario greets David as he enters a strange land that seemingly wants all humans dead.

David does not get far as he dreams or possibly lives in a secondary normal world with a family. These alternating plots with parallel mishaps confuse David about which world is real and who he is. I am pretty sure he prefers the wife and kids version, although kids can be rough.

Calvin, a Preservationist, takes David along with him, knowing that he is key to some future plot to save the world. Traitorous to Plasticity, a recreated glass bubble city full of depressed but healthier businessmen, Calvin has formed a group called the Cause.

The Cause wants to end Plasticity and their cruel experiments and disregard for a more soulful human life.

David learns that The Chemical Wars, sparked by genetically modified plant engineering, caused farmers and the poorer classes to become ill. Hence, this f’ed up new environment is born.

Even before that fateful event, the faulted government self-destructed over class, greed, and prejudice, all of which contributed to society’s and the earth’s untimely demise.

Sound terrifyingly prophetic?!  P.S. I am pretty sure that the dinosaurs had it easier. Calvin and his team lead the charge to take back the land and work in harmony with Mother Nature.  I am not going to lie: Calvin is pretty sketch too.

When the Progressives ultimately rescue David from one of Calvin’s terrorist attacks, they offer him a trade: his memories for informational uploads about Calvin. The city wirelessly connects David to their databases and both sides use David to hack each other’s systems.  David is a pretty trusting guy.

This new society is a world where people are connected via clouds and storage. Without giving away spoilers, the novel ends with David learning who he is and which side his ultimate allegiance lies. There is a love triangle—that gets a little weird—and of course, destruction and death.  Do I sense a sequel?  Please?!

Loving This Philosophical Science Fiction Indie Title? Other Indie Book Reviews by TUL That You May Enjoy:

The Unfortunate Expiration of Mr. David S. Sparks reminds me of M.T Anderson’s, Feed, and Scott Westerfeld’s, Uglies Series. Both upgrade society and alter mankind in pretty messed up worlds.

Pieces of David Sparks also evoke the maze of worlds in A Wrinkle in Time. I picture Oprah playing Sarah and compare David’s mind time traveling and different planes of reality to Meg’s tessering.

Of course, unlike these young adult titles, Aicher describes contemporary adult issues in his self-destructing world.

If you are looking for science fiction that makes you think about current societal problems with a plot that leaves you guessing and continuously thinking, David’s mind will hardwire you right into The Unfortunate Expiration of Mr. David S. Sparks.

I cheered for David all the way and tried to figure out his story for him.  I cannot wait to read more by this author, and Aicher reminded me that I need to pick up much more science fiction.

I would like to personally thank William Aicher for sending me a free copy of The Unfortunate Expiration of Mr. David S. Sparks along with some unicorn dust in exchange for a fair and honest review.  The bigger philosophical question here: Where is my library cake?

Author: Read more about William Aicher here.  Bill is a strong advocate against the piracy of books, passionately supports indie writers, and is an entertaining and kind Twitter friend.  You can follow his reading and writing adventures on Twitter here.

WOW this book sounds incredible! I love sci-fi and really enjoy it the best when it has well-executed philosophical underpinnings and the fact that you enjoyed this as a person that doesn't usually read sci-fi says a lot. Great review, Christine!

Thank you, book bestie!! I need more sci-fi in my life! Thankfully after this post, a ton of authors reached out.

This book sounds amazing!! Sci-fi isn't a genre I tend to go for, but the way you presented this book has me wanting to get it for sure.

Aw, that's so great to hear. Sci-fi isn't really my thing either, except for dystopian YA, but I think this book helped me realize that I need to get back into the genre. Aicher is a really great author and online human being, too!

Great review I always enjoy reading your thoughts on books. Sci-fi is one of my fav genres so I think I will pick this up in the near future. :)

I read a lot of YA dystopian and fantasy but not as much adult sci-fi. David Sparks was a much welcomed and needed title for me. If you don't follow Aicher on Twitter, definitely think about adding him. He connects well with the writing world. Thank you!

Thank you for the kind words about my book. I truly appreciate them and am happy to hear you enjoyed reading it.

Thank you for sending a copy to me! I needed a good science fiction book to get back into the genre.

Another blogger and I were thinking about hosting some type of unpublished book contest where authors send a small submission of their unpublished plot and part of their story. We would pick our favorites and showcase them on the blog. As someone heavily rooted in the indie and writing arena, do you think writers would be interested?